Benni and I hosted my family for Thanksgiving this year. It was Benni's first turkey (I'm a pro, having hosted about four Thanksgivings now) and he was so worried, and I kept saying, baby, it's not that hard to cook a turkey. Just baste, and everything will be fine. 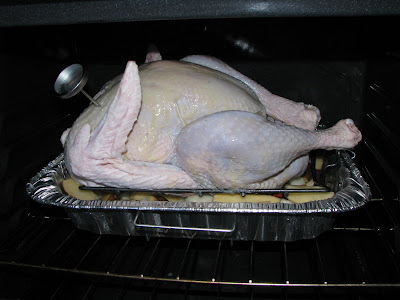 Are you ready to get basted, turkey?? 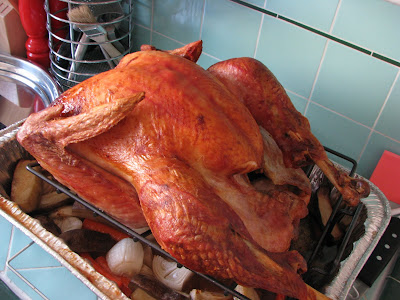 And it turned out fine. Better than fine, actually. (The vegetables we roasted underneath the turkey made it smell AMAZING.)

After dinner we all watched some football, and then I decided to have a Gingerbread House competition. I had purchased two gingerbread house kits from Bed Bath and Beyond the evening before (the woman at the counter: "How cute! Are these for the kids?" Me: "No, they're to keep my parents occupied so they don't ask me why I'm not married." I love talking to total strangers so much). And my family peeled themselves away from the television and worked hard. We separated into two teams, and my brother Scott was deemed Judge and Executioner of the Gingerbread House Contest. (When you put things in caps it makes it sound more official.) 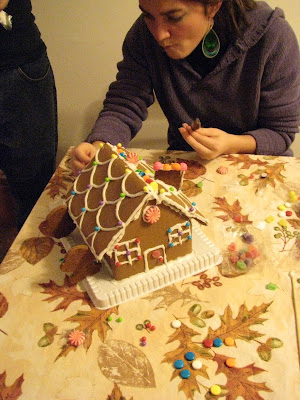 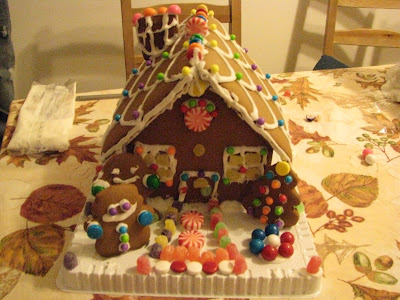 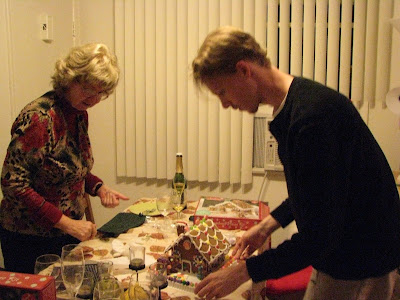 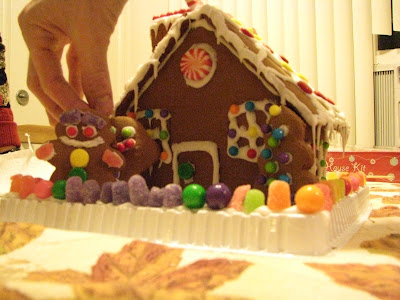 Jeff puts the finishing touches on our Gingerbread House. He created the frosting "icicles" by using a wooden skewer to drag them down. Can you tell he's the artist in the family? 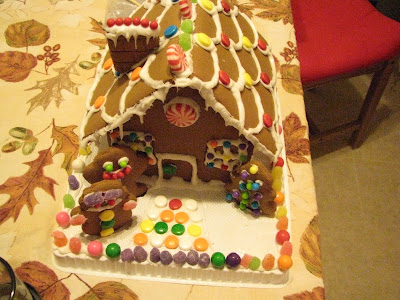 Here's Team Two's finished house! (I think ours is pretty awesome.)
Scott decided it was a tie. But I just think that's because he doesn't want to jeopardize his chances at getting Christmas presents. 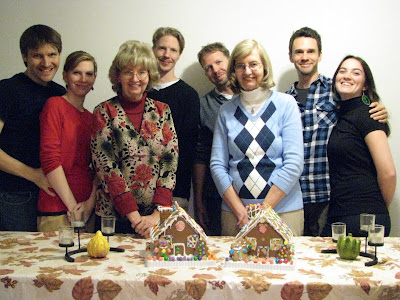 Two houses, both alike in Gingerbread, in fair Burbank, where we lay our scene... The required family photo behind the two houses. Left to right: Benni, Me, Aunt Darlyne, Jeff, Scott, my mom, Tom, and Val. 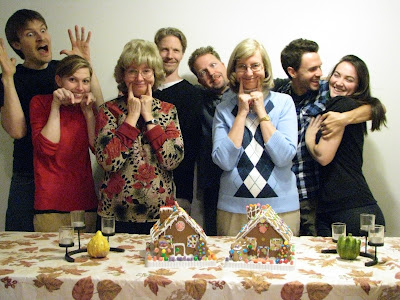 Of course, we never really do things the same way everyone else does. So, just in case you were wondering about me... yes. The Weird is genetic. I was born that way.

And finally, to move on to the holidays... Lori over at Lori Times Five makes the cutest little coffee cup sleeves ever. She knits them and then sews on different plants that represent qualities like courage, and compassion. (Her Etsy store is here.) She calls them Green Sleeves and I sort of fell in love (not that I don't already adore Lori - she's beautiful, inside and out, and takes breathtaking photographs and is the owner of the world's CUTEST DOG) when I first saw them so I had to buy a couple to hand out as gifts to my coffee-loving friends.

So when I got my very own Green Sleeve over the Thanksgiving holiday (along with everyone else's), the first thing I did was rush out to our neighborhood Starbucks with Benni and ask that he take a picture that I could send back to Lori.

So Lori, this is for you... thank you, a hundred times over, for making my day every time I get my hot chocolate fix. :) 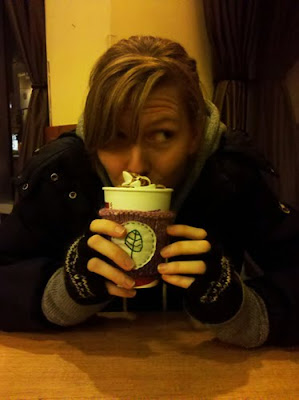 And yes, I did get whipped cream up my nose in order for Benni to get this shot. Because I'm professional like that.

Love to you all,
Tracy
Posted by Phoenix at 6:22 PM

The turkey looks amazing. I can't say that Scott had an easy time of it judging those gingerbread houses, because they were both pretty darn awesome. Clearly your family is very talented. So talented, in this case, equals weird. Weird good.

That looks like the cutest Thanksgiving ever! I love the contest idea, so cute!

I think we're coming to your guys' next Thanksgiving. So lovely to see your holidays were so happy! YAY!

well this was the perfect place to come to get away from 'i'm-not-sure-it's-real-stress yet-but-it-might-be' of the ambitious holiday season!

your family is adorable. your gingerbread houses are adorable. however the turkey asked me to pray in silence just because in turkeyville a roasted glow is not fashionable ( i had a turkey too) :)

now i'm hungry for turkey all over again, and candy houses with hot cocoa! i love how you lured everyone from the game (wish i'd thought of that!) brilliant idea. it does indeed look like a tie between teams.

i'm so glad you liked the greensleeves (thank you), i am sure they love you back. SO cute photo, i love it.

♥ lori
p.s. did it work?? the houses? did they distract your parents from THE question?? :)
haha

What a wonderful idea. I enjoy the ginger bread house making competition. I've never heard of such an event before. I suppose it's away of bringing folk together - a little healthy competition.

And Benni's turkey looks magnificent. My compliments to the chef.

Oh, Phoenix, you are so SMART!! I love the idea of the gingerbread house contest to keep the relatives occupied. Tee-Hee. I'm going to write that in my journal for next year. I love all of your photos of your beautiful family, too. Your turkey is truly a work of art!!

I'm gonna borrow that coffee sleeve idea. I have a bag of old sweaters and I'm gonna cut the cuffs off and decorate them with bling for gifts. Thanks for the idea from your friend. I'll buy one from her shop, too, for sharing.

Um....frosting icicles would definitely be a winner in my book!!! So glad you and Benni had a fabulous Thanksgiving. Looks like a great time was had by all!!! I've requested a green sleeve on my Christmas list but I think I need to edit the link. Those are too cute!!! XOXO

I love the icicles, Tink always gets a ginger bread house kit. With her it is all about the doing not the end product. The T-Rex was trying to describe their ginger bread house to me. He told me it had no windows or doors. I would have loved to have been there for the construction.

Oh Yummmmm. I'm feeling the urge all over again. It's wierd...only the pictures appeared to me on this blog post. My computer must be freakin....but I loved the pic of you with your coffee :)

Oh, this is so perfectly American. Love it!!

Looks and sounds like a fabulous Thanksgiving. Glad you had a good one. :)

You have a wonderful family!

Cute series of photos!!
I'm going to take a class this week on gingerbread house-making. No doubt I'll screw it up cause I have NO artistic talent. None. Zero. Zilch. Nada.

The whipped-cream-up-the-nose photo should be your next profile photo. :)

And I will no longer believe you when you say you can't cook. I think I will go through life being too intimidated to cook a turkey.

I have been spellbound from the two houses of Gingerbread.

Stupendous for the imagination of the colors and the wealth of the details...compliments.

That's a great idea, the G-bread houses. I'll have to remember that for the kiddos.

Love the quote inline at the store. Never underestimate the shock value of a well-delivered line.

I think I was kidnapped. I definitely belong to your family.

Dude the skin on that turkey looks MAD good!

and i love the gingerbread house idea! perfect to keep everyone busy! and so cute!!!

Love the gingerbread house contest idea! And your family photos are so great! What a fun bunch you guys are!! :)

okay. those last two pictures are genius. seriously. you're adorable.

THAT! Looked like a fun time. Looked Delicious too!

Kudos on a good Thanksgiving!

that turkey does look amazing! wow! and those gingerbread houses look like such fun to make. now I want to have a contest :)

and that green sleeve is so cute! as are you my dear. even if you did get whip up your nose haha. I totally would have too!

looks like such a great time. and that gingerbread house, i want to devour it. seriously:)

The Kid In The Front Row said...

I am all kinds of hungry.