Sometimes I think my brain is like a camera. Besides the fact that I do have a slightly photographic memory (nothing cool or helpful, by the way, it just takes "pictures" of random words on websites or book pages I'm skimming and then I have to go FIND THE WORD or I go insane), my brain has an insane zoom lens that is able to single-handedly wipe out everything else that is going on in my life and, with laser focus, shine a thousand points of light (or darkness) on any given situation. It's this astonishing lack of perspective that I live with on an everyday basis, and sometimes it just kicks my ass into my teeth. My yoga teacher asks, "How are you going to get yourself through this moment?" when we are sometimes in a difficult pose, and I raise my eyes to her in a sort of silent you tell me because damned if I know. I have no idea how to get myself from one moment to the next sometimes, and it alarms me, my lack of perspective.

Yesterday I came face to face with someone else who shared my fabulously craptastic lack of perspective, in LA traffic of all places, and he purposely tried to run me into oncoming traffic with his car. I was deeply afraid, incredibly pissed off, but most of all ashamed for my part of what had happened. Had I done anything violent, stupid or illegal to him? No. But I could have done better. I could have put up with his bullying and just moved over into the next lane to let him pass, as I do for so many other bullies in this town. Because in LA, the person who is the most insane driver, who cares the least for the safety of others, who is the most selfish, wins, up until the day he or she dies in a car wreck, and you just hope to God you're not around on the day that bully's time runs out. My perspective failed me in the worst way possible, and I almost paid a very dear price for it.

But other times my perspective is sharp and clear, with minimal soft-focus on everything that's going on around me. I'm planning a wedding, which has kept me plenty busy, and yet I'd say my stress level, on a scale of one to ten, is probably a three. (I'll get back to you in a month.) But I intuitively know that a wedding is not supposed to be stressful to plan or execute - no matter how many times people have told me otherwise in a sing-songy voice. I'm not supposed to go through a year of hell just to have one perfect day. It just doesn't work that way, even if I believed perfect days actually exist, which I don't. And while it seems that I get to watch everyone else lose perspective around me, I feel like Cassandra, the prophet no one believes, telling them it's going to be just fine. Because, honestly, if Benni and I end up married at the end of the day... it's a good day.

Perspective is scale. It's measuring things against each other, weighing each moment's importance, and being able to toss out what is taking up more energy than it should. It's comparison, it's asking Well is this as important as that? and it's figuring out each moment's place among all the other moments in your life. Is this what you want to focus on? perspective asks, lightly touching each moment like it's in a store, poking fingers into soft sweaters. How about this one? And this one?

It's up to us to have the discerning eye. We cannot grab every moment and treat it as equal, and there are some moments of such utmost important and magnitude that they demand we put down EVERYTHING and simply stop and pay attention. The moment I tell Benni that I will be his wife for the rest of my days is important; the way the napkins on the reception tables are folded is not. The way I treat every person with kindness and respect while driving, whether they deserve it or not, is important. Making a bully embarrassed about the fact that he's a bully is not, in the grand scheme of things, that essential.

Perspective is the art of weighing and measuring and categorizing each moment in our life - and yes, how we are going to get through it - and we are the artist, and our lives are the canvas. And it is the work of a lifetime. 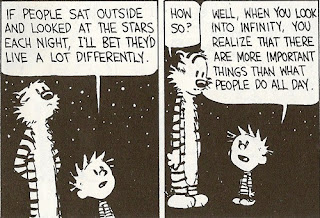 (Calvin and Hobbes, by Bill Watterson)
Posted by Phoenix at 4:53 PM 14 comments: