when nerds do Halloween

Halloween and I never really got along when I was younger, mostly because I hadn't really yet embraced the fact that I was a nerd. It's hard to be a nerd regardless (as treasurer of the Latin Club and the Amnesty International Club, I don't think I have to tell you how much touch I did NOT get in high school) but then you've got Halloween and your friends all want to dress as something slutty and you're like, how come they only make Han Solo outfits for guys? And if I dress up as Amanda from Highlander, is anyone REALLY going to get that reference?

So I would usually dress up as a cat or a ghost or something else boring, but my heart was never in it, especially since my friend Lindsay spent a good four years in a row trying to talk me into dressing up as a tomato. You will never see pictures of me dressed up as a tomato on Halloween, and why, why is that? Because I refused. I may be a nerd, but I've still got some self-respect.

So it was a few Halloweens ago that it finally occurred to me that I could celebrate Halloween like a nerd does, meaning I could dress up as some esoteric cartoon or comic book or literary or pop culture character and people might actually not trashcan me or knock my books to the floor while I was walking into AP English class. Not that they did that to me in high school anyways, because nerds quickly learn to choose one of two survival tactics while being teenagers: a) Blend and disappear into the wall, or b) learn martial arts so you can kick everyone else's ass if they give you crap.

This is me two years ago as Neil Gaiman's Death (and yes, I'm aware Death was a brunette, but blonds should be allowed to kill people too). 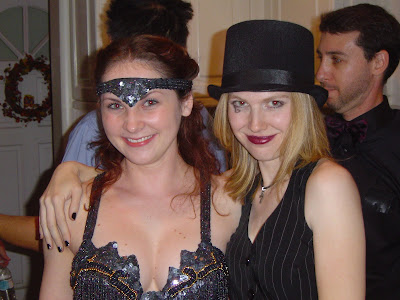 Me as a blond Death. Also, that's my friend Chase, and men, no, she's not single, stop asking. 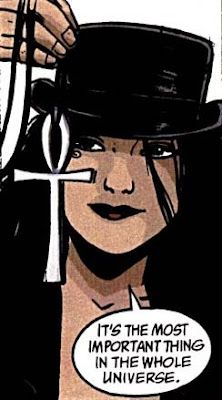 And speaking of blonds being allowed to kill people... 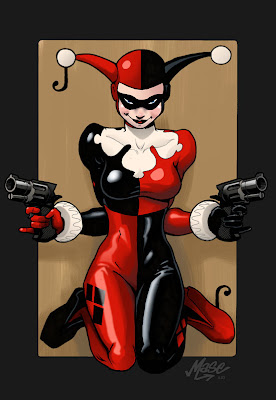 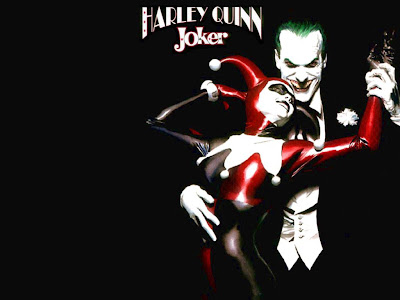 I found my costume for this year. Meet Harley Quinn, the Joker's main squeeze, and a true blond that kills people. A lot. 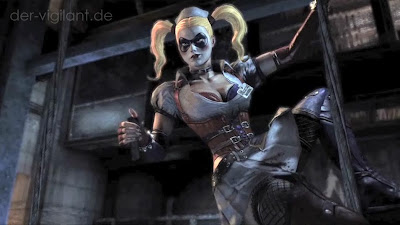 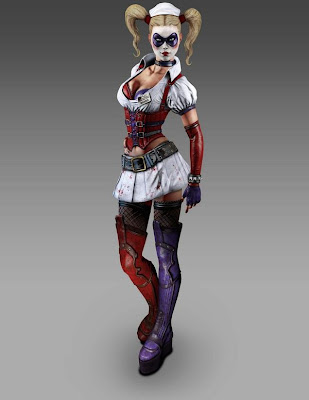 The first two photos are very classic Harley Quinn in a jester outfit, but a) the jester outfits look lame on 95% of the population, and b) the outfits are skin-tight, and I've got more than 1% body fat, so no thanks.

The second two photos are Harley Quinn from Batman: Arkham Asylum, the new video game, and I love the new look they've given her.

So I'm combining the first look and second look by keeping the color scheme all black and red, then mixing in some punk and Arkham Asylum by throwing on a red and black corset (the one I was wearing in the Dia de los Muertos pics), black and red arm warmers, a black skirt, red tights, black fishnets, tall black boots, and painting my nails black and red. I'll also be sporting pigtails and throwing on tons of black eye makeup and blood red lipstick. Wish me luck.

And Benni is going as a very classic Joker, so we should balance each other out quite nicely :)
So does everyone have their Halloween costumes? What are y'all going as?? I wanna know!!
Posted by Phoenix at 12:35 PM

This is my first visit to your blog I connected through another blog. I like your content - photos and stories.

I will be back.

I can't wait to see photos!!! What a fabulous costume idea. I went a few years ago as Jill Valentine from Resident Evil (I went for the movie version) and I won first place in the costume contest I entered. I even dyed my hair for the costume. LOL!!! XOXO

Love the costume idea!
I don't have to dress up for Halloween this year, but if I did, I'd go as the apocalypse in my haz-mat suit ;)

I've been eagerly waiting to see you as Gaiman's 'Death' and you looked awesome, girl! Can't wait to see you in this year's costume. Hell, I didn't even know the Joker had a gal-pal! LOL! Blessings!

Can't wait to see the pics. Unfortunately for me, this year will be quiet at Arkham. My troops here are all under the weather so we may have to cancel Halloween this year.

It would be cruel and unusual punishment to make them go trick or treating with 102 fever!

I think thats an awesome idea!!

you are so funny! and so cool! and your costume is going to be the shit!!!

gah. YOU ARE TOO COOL!

Have fun! I've never been one to get into Halloween, either. I actually can't even remember the last time I dressed up... And I don't see that changing anytime soon. :) I do love your costume, though, and if I were to go as anything, I would certainly pick something like you: more off the beaten path and certainly not in the "I just want to look like a skank" genre. :)

I am thinking of dressing up as a mormon fundamentalist gone wild. Prairie skirts with HUGE slits and conservative blouse unbuttoned very very low.

Oh. My. GOSH. Boyfriend is going to be SO FREAKING JEALOUS of your idea! We got as far as Batman and Robin, then argued about who had to be Robin. Never thought of Joker and Harley Quinn!

I was gonna be Bob Marley because my son had the get up already from last year. My husband saw it, said I couldn't be Bob Marley cuz I was a woman...and stole the costume. Now I got nothin. Hate dressing up anyway. I guess I'll just go as me. After all, I'll be the only one.

Your a very cute nerdy weirdo in your halloween costume.
What about if I go as your Mom and you can say Fuck in front of me, and then your friends will think your cooler than your bff. heehee.(still laughing about your dinner party.)
☺

I am not dressing up and instead working a party on Halloween, so I get to live thru you!!!

spooktacular idea!
Greetings from Paris my dear & thank you...
xo*

ooo that will look fabulous. how creative!!

i'm going as audrey hepburn. i'm so not creative and i'm not down with dressing like a slut, so...it leaves very few options. :)

"how come they only make Han Solo outfits for guys?" You are funny.

I have this future T-shirt I want to do design "And the geek shall inherit the earth".

I adore your option b), impressive. I wanted to be a ninja when I was little so that would probably be my costume if I didn't avoid halloween.

Your comic "Death" character looks so cool, oddly someone showed me some early The Crow comic today and it reminded me of the picture - I adore that you read comics.

I love this story! You are so awesomely awesome. I think I love you.
:)

Hehe I only got into the swing of Halloween when I was in the US. Now that I'm back in this side of the world, there's not a whole lot of buzz around it. Though my senior year of undergrad, I was totally out of ideas for Halloween, so my friend and I thought it'd be entertaining to just wear pretty dresses, tie a ribbon around our wrists and if anyone asked what we were, we replied "God's Gift to Men". Hehe, it was an entertaining night. :P

Have fun dressing up this year, post up pics so we can see! <3

okay, you're kind of selling me on this whole idea of halloween. just sayin...

This is a great post. Looks like so much fun. I had a very low-keyed halloween this year.

Harley Quinn is so awesomely badass!