April is National Poetry Month, guys, so I'm gonna do what I did last year (you can check out last year's National Poetry Month posts here, here, here, and here) and post some lovely, totally inspiring, jaw-droppingly beautiful poetry for the next four Fridays in April. Feel free to just read and enjoy, leave comments if you like, and let the poems carry you through the weekend and on into the week. I know I always do. :) 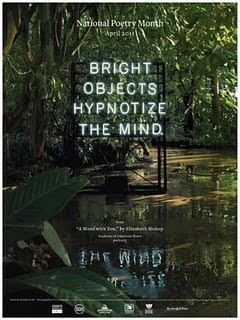 Hurling Crowbirds at Mockingbars (Hope is Not a Course of Action)

By Buddy Wakefield
If we were created in God’s image
then when God was a child
he smushed fire ants with his fingertips
and avoided tough questions.
There are ways around being the go-to person
even for ourselves
even when the answer is clear
like the holy water Gentiles drank
before they realized Forgiveness
is the release of all hope for a better past.
I thought those were chime shells in your pocket
so I chucked a quarter at it
hoping to hear some part of you
respond on a high note.
You acted like I was hurling crowbirds at mockingbars
and abandoned me for not making sense.
Evidently, I don’t experience things as rationally as you do.
For example, I know mercy
when I have enough money to change the jukebox at a gay bar
(somebody’s gotta change that shit).
You understand the power of God’s mercy
whenever someone shoves a stick of morphine
straight up into your heart.
It felt amazing
the days you were happy to see me so I smashed a beehive against the ocean
to try and make our splash last longer.
Remember all the honey
had me lookin’ like a jellyfish ape
but you walked off the water in a porcupine of light
strands of gold
drizzling out to the tips of your wasps.
This is an apology letter to the both of us
for how long it took me to let things go. It was not my intention to make such a
production of the emptiness between us
playing tuba on the tombstone of a soprano
to try and keep some dead singer’s perspective alive.
It’s just that I coulda swore you had sung me a love song back there
and that you meant it
but I guess sometimes people just chew with their mouth open so I ate ear plugs alive with my throat
hoping they’d get lodged deep enough inside the empty spots
that I wouldn’t have to hear you leaving
so I wouldn’t have to listen to my heart keep saying
all my eggs were in a basket of red flags
all my eyes to a bucket of blindfolds
in the cupboard with the muzzles and the gauze
ya know I didn’t mean to speed so far out and off
trying to drive all your nickels to the well
when you were happy to let them wishes drop but I still show up for gentleman practice
in the company of lead dancers
hoping their grace will get stuck in my shoes.
Is that a handsome shadow on my breath, sweet woman
or is it a cattle call
in a school of fish? Still dance with me
less like a waltz for panic
more for the way we’d hoped to swing
the night we took off everything
and we were swingin’ for the fences don’t hold it against
my love
you know I wanna breath deeper than this
you know I didn’t mean to look so serious
didn’t mean to act like a filthy floor
didn’t mean to turn us both into a cutting board
but there were knives s-stuck
in the words where I came from
too much time in the back of my words.
I pulled knives from my back and my words.
I cut trombones from the moment you slipped away and I know it left me lookin’ like a knife fight, lady
yeah you know it left me feelin’ like a shotgun shell
you know I know I mighta gone and lost my breath
but I wanna show ya how I found my breath
to death
it was buried under all the wind instruments
hidden in your castanets
goddamn
if ya ever wanna know how it felt when ya left
yeah if you ever wanna come inside just knock on the spot where I finally pressed STOP playing musical chairs with exit signs. Forgiveness
is for anyone who needs a safe passage through my mind. I’m gonna cause you a miracle
when you see the way I kept God’s image alive. If I was really created in God’s image
then when God was a boy
he wanted to grow up to be a man
a good man
and when God was a man
a good man
He started telling the truth in order to get honest responses.
He’d say,
“I know.
I really shoulda wore my cross
again
but I don’t wanna scare the gentiles off.”

The Sciences Sing a Lullaby

Physics says: go to sleep. Of course
you're tired. Every atom in you
has been dancing the shimmy in silver shoes
nonstop from mitosis to now.
Quit tapping your feet. They'll dance
inside themselves without you. Go to sleep.

Astronomy says: the sun will rise tomorrow,
Zoology says: on rainbow-fish and lithe gazelle,
Psychology says: but first it has to be night, so
Biology says: the body-clocks are stopped all over town
and
History says: here are the blankets, layer on layer, down and down.

There’s no such thing
as the necessary poem;
that’s what saves poetry
from a life like ours,
from desire and striving.
That is not to say a poem
can’t yearn for something
it isn’t yet, can’t crave
a meal of only apricots
or want a one-way ticket
to another country.
It can. We know
how a poem can need so much
it turns to mush, and how
sometimes even out of mud
and mildew rise the most
fantastic flowers. No,
what I mean is different.
That the poem is redeemed
by indifference, that before
it’s written, the world
does very well without it.
Therefore it is free
to be what it wants to be
or not to be at all.
That’s its deliverance,
its saving grace, and why
when it decides to speak
we listen to a language
that is ours, but so unlike us.

I like the crowbirds. Funny and deep at the same time, and he mentions gay bars and God.

No idea what National Poetry Month is or how you're involved, but good luck with it. Poetry is in most cases beyond my mental capacity.

I love them all, Phoenix. You picked some awesome poems.

I think poetry is the most undervalued and misunderstood part of literature. It pisses me off when I go to my local library and the poetry section only has about 20 old, tattered, ancient poetry books. I own over 350 books of poetry and can't get enough of it (as you know.)

I can't wait to read your Friday poetry posts this month.

Nice selection! I am celebrating National Poetry Month in my class, and I learn quite a bit from my students every year at this time. I'm not a poet, but I enjoy and appreciate poetry very much. Thank you.

Love these!!! I'm so glad you are doing this again this year. :)

i wish i could write like this.
thank you for sharing tracy, i remember when you did this before. it's a lovely idea.

Hooray for the return of Poetry Month and your post! On a side note: Yesterday was National Beer Day!

Must admit, didn't know it's Poetry month, Phoenix! I should be getting back to literature instead of reading silly magazines...hah!

Such generous offerings, Tracy. Real poetry to set your heart pinging. Thanks.

Such generous offerings, Tracy. Real poetry to set your heart pinging. Thanks.

I love the last one, Phoenix! Pleased you are doing this again. Such a pleasure to read.

What I love about good poetry is the sometimes unlikeliness that makes supreme sense. Great picks. Thanks.

tracy, i need to come back when i can linger and read every word.

for now, this blew me away:

'Forgiveness
is the release of all hope for a better past.'

OMG. what a great clear way to look at something. thank you!

i hope you are well. i was in so. california recently and man is it beautiful.

I had no clue it was poetry month.. thanks for the lovely poems.

Oh, you make me want to include more poetry in my life. Alas, I was not born with an appreciation for it; it seems it would something to work for. Is it worth it? You make me think so.

Loved the comment by the way, and you're welcome and well-deserved. I love you and your blog and look forward always to your posts and comments.

I got the joke, by the way, Blah blah blah Ginger. I will write that one day. Maybe not exactly like that, but I will steal that scene and immortalize it in a piece of fiction nobody will ever read.

I won't judge otherwise, but I'll say that in that moment, your mother was beautiful, and I understand a bit more about you than I did before.

(=
Just saw your reel and head shots! (= How is the acting going?